People to People Diplomacy: from Bricks to Pencils. 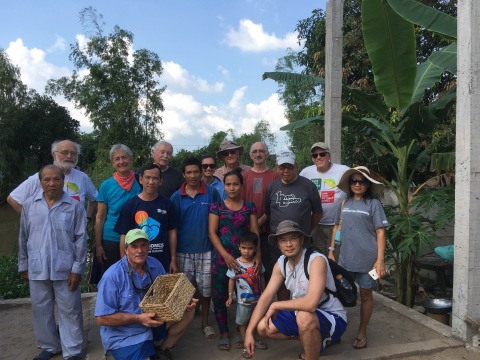 Then: Post Build, Hoi Xuan and in the classroom.

After our Habitat build was over in Dong Thap Province, five of us returned to the Mekong Delta after we said goodby to the rest of our team in Saigon.  We had made arrangements to re-visit the school where we first suggested the drawing exchange between Peaks Island Elementary, where I live in Maine ,and Hoi Xuan Elementary. During the past year, the two schools  have exchanged drawings. The kids in both schools (grades 3-5) drew the lives they live, sometimes sharing sentences or words. Drawing, to me, has always been an international language like music or song or quite frankly like getting dirty and working with other people whose native tongue you do not share.

The photo you see above was taken on a Sunday morning where the schoolroom was packed with kids and teachers and officials from the community gathered there to greet us and to see the drawings I brought to give to the kids in Hoi Xuan from the kids on Peaks Island.  It was also a time for the school and community to thank us for the project and for the gifts of paper and pencils that we  brought to them from Maine, USA.

After introductory remarks, we handed out paper and pencils and drawings began in earnest as the Hoi  Xuan kids got busy drawing their responses to the drawings the kids from Peaks had drawn for them. These kids, of course, have never met and live in very different cultures and climates to name just a few outstanding differences, but I was struck by the similarities in many of the images drawn and /or responded to. For example:

Here’s a Peaks Island skateboard drawing by one of the boys on Peaks.  And below,  one of the Hoi Xuan kids took inspiration and did a riff of his own.

Birds were Big Subjects for both groups of kids: First, a Peaks variety.

Then, a Rooster from Hoi Xuan.

Who knew?  Trees Have A Similar Shape.  First, Hoi Xuan.

Then, Blessings drawing (from Peaks) of a girl swimming.

Has found its way to Vietnam.

Even local officials were drawn in. 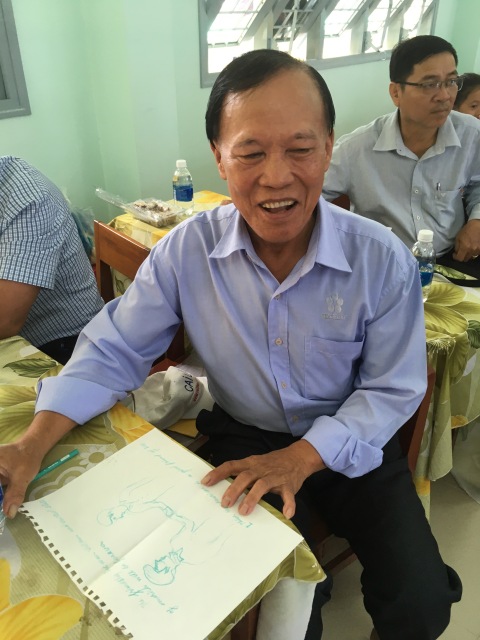 All in all, we had a wonderful day and I left with an emotional lift from this kind of sharing. What wonderful art was produced in such a short period of time! And, how the language of art can transcend supposed cultural divides. To help build a home with a family and to make art with children is to share a universal language, one that transcends the artificial geographical and political boundaries that are so often used to divide us as human beings.  Perhaps we all need more bricks and pencils in our lives.

§ 2 Responses to People to People Diplomacy: from Bricks to Pencils.

You are currently reading People to People Diplomacy: from Bricks to Pencils. at A Generation of Leaves.