After our Habitat for Humanity building project in the northern Tu Ne Commune last year, we all returned south to Saigon and then several of us went to visit Phuoc and his family in Cai Lay. Phuoc had been our translator during my first trip to the Mekong and now we all were friends. Phuoc is very involved in a group of retired teachers and students who offer educational and financial supports to students in need from elementary to high school. One of these schools is in Hoi Xuan, a rural, elementary school some 75 miles from Cai Lay. Phuoc arranged for us to go to the school to speak about an idea we had about a cultural drawing exchange between Peaks Island Elementary where I live and Hoi Xuan Elementary. So, on a Sunday afternoon, 5 of us and Phuoc along with a driver bundled into a van and set off. Unfortunately, we ended up getting lost and arriving two hours later than we said but everyone was still waiting for us, the principal of the school, the teachers and the children. 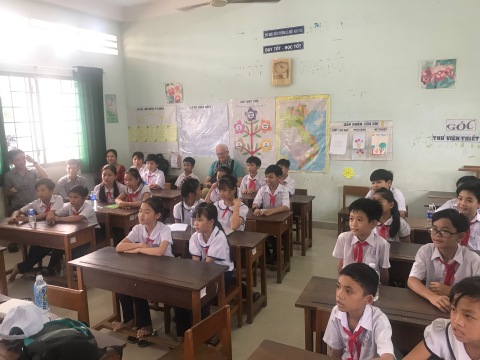 We introduced ourselves and…

I explained how we had all flown from the United States to Vietnam, that I lived on an island in the state of Maine called Peaks. As I was talking I drew on the board to illustrate much of what I was saying while Phuoc translated.

I asked Phuoc to tell them about our idea of the children from the two elementary schools exchanging drawings that would show how their lives were different and also how they were similar. Since Hoi Xuan is located in the Mekong Delta and Peaks Island is surrounded by Casco Bay both of those worlds have bodies of water in common. The kids were all in the same age range but so much is also different when neighborhoods are quite literally half a world apart.

Phuoc translated all this and then I asked, did the kids want to do it? Phuoc translated and the children responded in unison with an upward and downward lilt of voices and Phuoc took a step back with a funny, quizzical look on his face. I asked him what they said. He said,”They said, “No”. But why, I asked? Why wouldn’t they want to do it?  He translated again and the simple and unified response was that they would not have the money to send the drawings to America. Both Phuoc and I assured them not to worry, that we would find the money to send the drawings back and forth. With that impediment  resolved (and another lesson learned for me) Phuoc and I handed out paper and pencils that I had brought from home. Then….

The kids (as well as Paul, our fearless team leader and my own Saint Andrews Elementary School childhood chum, got down to the real business of drawing their worlds to share with us. 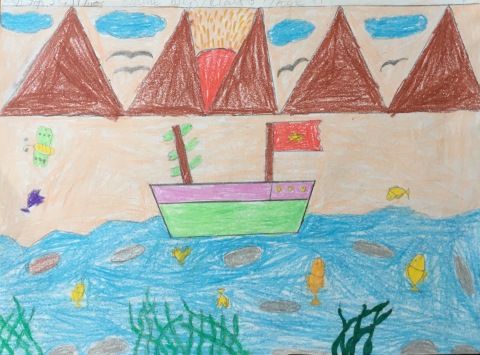 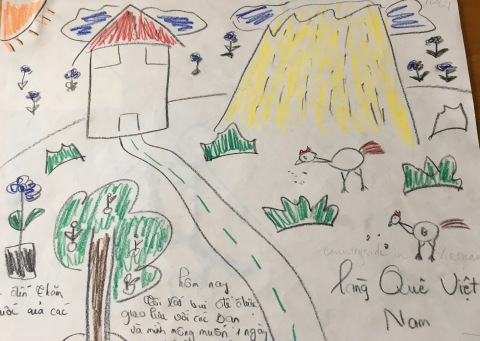 You are currently reading Kids Drawing Exchange/Peaks Island, Maine and Hoi Xuan, Vietnam at A Generation of Leaves.