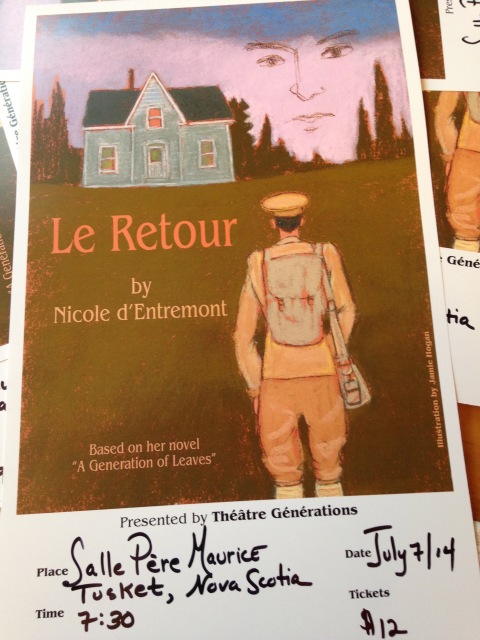 The début of Le Retour will take place at Salle Père Maurice in Tusket, Nova Scotia this summer on July 7, 2017 with a second performance scheduled for July 14th.  This will also mark the birth of a new theatrical troupe, Théâtre Générations.  In many ways, we are a troupe spanning the generations ourselves from 70 years to 8 years and all ages in-beteen.  Our common bond is our allegiance to one another and our ancestral bond to Nova Scotia.  Acadian and English blood runs through our veins, the same mix of blood spilled on the far-flung battlefields of WWI.

The story of Le Retour is not a new story. There was a war. Governments ordained and men (often boys) went to fight in that war. Families were involved.  In our story, two brothers enlisted in the Royal Canadian Regiment during WWI.  One came home from that war, one did not. What is new about that story?  It’s such an old, old story but one continually new to the families who experienced it, even now, almost 100 years later.

What is the return home like for the soldier who has been and who has done what he has been required to do in that other life that is now over.  But, is it really over?

My father was seven years old when his oldest brother, Léo, enlisted in the Royal Canadian Regiment in 1915.  Ten months later Léo was reported missing and then killed in action in Ypres, Belgium.  His body was never recovered.  His name is now engraved on the Menin Gate along with the more than 55,000 other names of the missing whose bodies were never found.

The next son in that family, my Uncle Felix, lied about his age and also enlisted, but four years later, he came home to the village.  Le Retour imagines that story.  The story of the boy who comes home.

I am writing this Blog entry on Memorial Day weekend, 2017, in the United States of America.  On Memorial Day, I will think of my two uncles. Next summer, 2018,  Théâtre Générations plans to go and present our play not far from the Menin Gate where every evening since 1928, traffic stops, people gather and  bugles sound in remembrance of those whose names are engraved on that wall who have no known grave.

It is a simple and dignified ceremony. I was there once and I look forward to participating again in 2018. I was moved by the ceremony because it was simple and for the few words said and the silence of those gathered and the haunting loft of the buglers’ notes that rose in the still air.  For my own part, I did not want to hear patriotic words.  I did not want to hear praise for sacrifice although sacrifice there was and valor and, I am sure, its concomitant of regret for some actions done. That is what soldiers endure when they come home from war, if they come home, and what they and their families must bear up and until today in this year 2017.

For those of you who can, please come to our production this summer.  All this year and into the next, we will be raising money for our troupe to travel to Belgium in June of 2018.  We have already garnered a generous donation of $1,800 from the Municipality of the District of Argyle to assist us in presenting our play in Ieper, Belgium and, hopefully, we will be presenting Le Retour in other venues in the maritimes.

In the next few weeks, while we are in rehearsal, I hope to post some clips on these pages for you to see a bit of our process and also in order to introduce you to the cast.

For now, as befits this Memorial Day weekend, I will close with the sculpture of The Brooding Soldier, St. Julien Canadian Memorial at Vancouver Corner, Ypres Salient, Belgium. 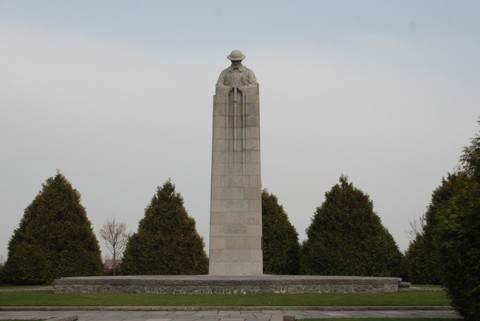 The Brooding Soldier was designed by Frederick Chapman Clemesha, an architect from Regina, Saskatchewan.  Clemesa, himself, had served in the Canadian Corps during the war and had been wounded.

You are currently reading Début de Le Retour at A Generation of Leaves.